1) Blood collection tube containing heparin sodium or heparin lithium: heparin is a mucopolysaccharide containing sulfate group, with strong negative charge, which has the function of strengthening antithrombin III to inactivate serine protease, thus preventing the formation of thrombin, and preventing platelet aggregation and other anticoagulant effects. Heparin tube is generally used for the detection of emergency biochemistry and blood rheology, and is the best choice for electrolyte detection. When testing sodium ions in blood samples, heparin sodium cannot be used, so as not to affect the test results. It can also not be used for white blood cell counting and classification, because heparin will cause white blood cell aggregation. 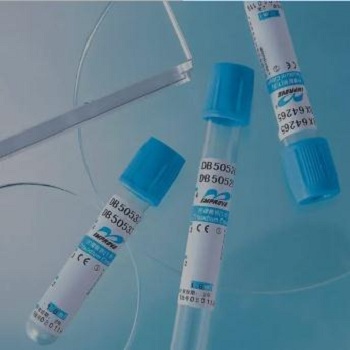 2) Collecting blood vessels containing ethylenediaminetetraacetic acid and its salt (EDTA -): ethylenediaminetetraacetic acid is an amino polycarboxylic acid, which can effectively chelate calcium ions in the blood. The chelated calcium will remove calcium from the reaction point, which will prevent and terminate the endogenous or exogenous coagulation process, thus preventing blood coagulation. Compared with other anticoagulants, it has less influence on the agglutination of blood cells and the morphology of blood cells, Therefore, Desheng EDTA salts (2K, 3K, 2Na) are usually used as anticoagulants. It is used for general hematological examination, but not for blood coagulation, trace element and PCR examination.

3) Blood collection tubes containing sodium citrate anticoagulant: sodium citrate plays an anticoagulant role by acting on calcium ion chelation in blood samples. The National Committee for Clinical Laboratory Standardization (NCCLS) recommends 3.2% or 3.8%, and the ratio of anticoagulant to blood is 1:9. It is mainly used in fibrinolysis system (prothrombin time, thrombin time, activated partial thrombin time, fibrinogen). When taking blood, pay attention to taking enough blood to ensure the accuracy of the test results. After taking blood, it should be immediately reversed and mixed 5-8 times.