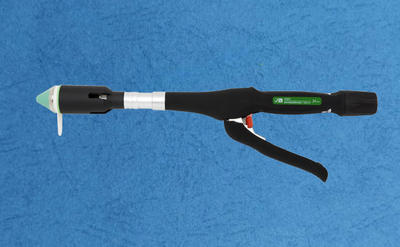 stitching nail is made of TC4, the nail seat and movable handle are made of 12Cr18Ni9 stainless steel, and the components and body are made of ABS and polycarbonate. After the anastomosis, the anastomosis should be able to bear the pressure of no less than 3.6kpa, without water leakage and tearing; The hardness of the cutting knife should not be less than 37.

Although anorectal stapling for treating mixed hemorrhoid emergence, rectal mucosa prolapse, and rectal diseases, has a good effect, but also to have certain complications, because its excision of rectal mucosa is circular, anastomotic into ring, so the late part patient can appear anastomotic hyperplasia causes anastomotic stricture, patient defecate difficulty, etc., early postoperative within 1 to 3 months, Anastomosis should be expanded on time to prevent anastomotic stenosis.

One-off anus bowel stapling, the price is more expensive, at present is in commonly 3000 to 4000 yuan, although already in coverage, but lower than the scale of drug reimbursement ratio and, and submit an expense account have limit set, so generally applicable to the economic condition is better, or has the insurance of worker medical treatment, the patient or the commercial insurance.

Dietary attention when pph surgery over